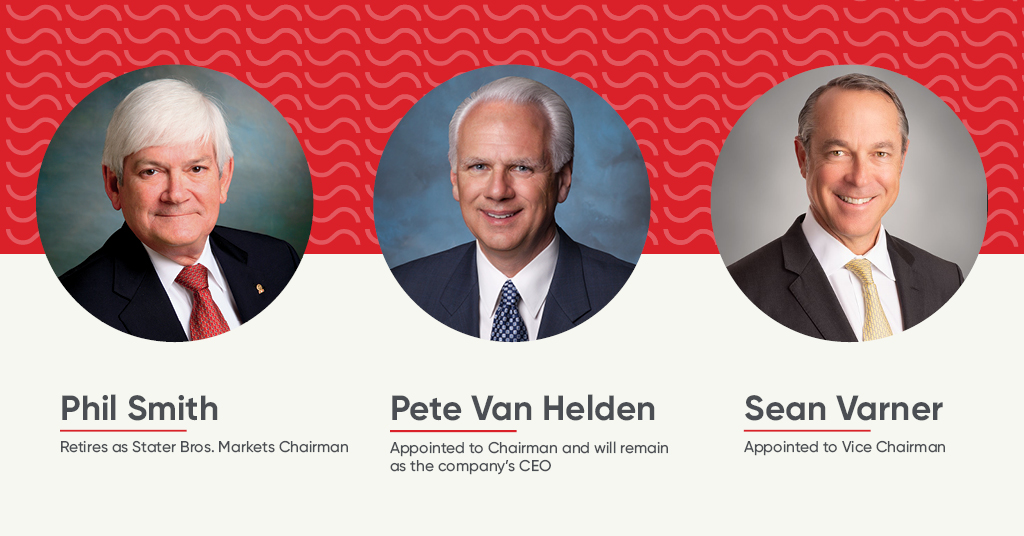 Smith has had a distinguished career at Stater Bros. spanning over three decades. He began his career at the company in 1987 as a controller and was promoted to Vice President-Controller in 1998. He held various finance and accounting leadership roles, ultimately serving as the company’s Executive Vice President Finance/Chief Financial Officer/Chief Accounting Officer before his retirement in 2012. Afterward, Smith stayed on as a consultant at the request of late Executive Chairman Jack H. Brown. In 2016, after Brown’s passing, Smith was asked to serve as Chairman of the Board. During Smith’s tenure, Stater Bros. saw itself grow from under 100 stores to over 170 locations throughout Southern California.

“It has been a privilege and honor to serve the Stater Bros. team and our loyal customers over the last 35 years,” said Smith. “With Pete and Sean’s leadership, the company will be in capable hands, and I look forward to seeing them take Stater Bros. to the next level.”

Van Helden said, “On behalf of the Board and Stater Bros. employees, I would like to thank Phil for his years of dedicated service to the company, our teammates, and our customers. We wish him the best as he embarks on the next journey in his life.”

“Varner & Brandt’s relationship with Stater Bros. goes back many years, and is based on mutual respect and aligned values,” Varner noted. “I am honored to serve as Vice Chairman and look forward to helping Stater Bros. achieve even greater success in the future.”

Varner is the Managing Partner of Varner & Brandt LLP, the leading business law firm in Southern California’s Inland Empire. He has over 25 years of legal and business expertise focusing on corporate and business law, real estate transactions, development and land use, finance, and technology. In 2021, Varner was appointed to serve as Corporate Secretary and General Counsel of Stater Bros. Holdings, Inc.