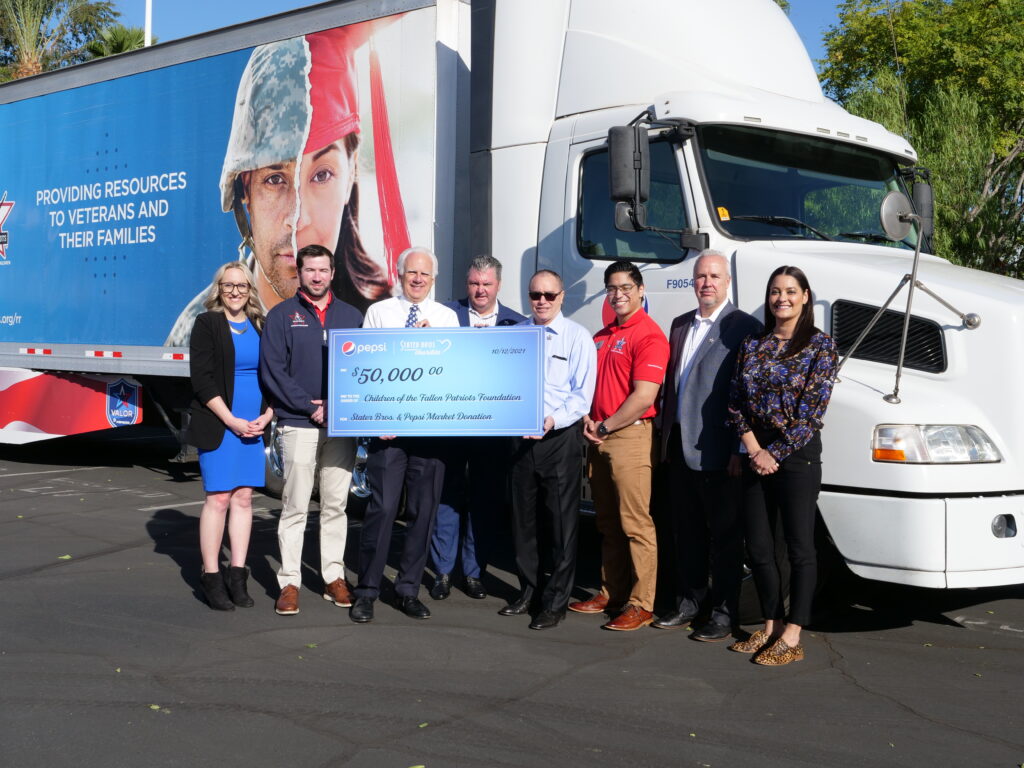 SAN BERNARDINO, CALIFORNIA (October 18, 2021) – Stater Bros. Markets and PepsiCo associates gathered to commemorate PepsiCo’s 6th annual “Rolling Remembrance,” an 8,000+ mile long relay that honors military heroes who lost their lives while serving the United States. This cross-country relay embarks from Seattle, transporting an American flag first flown on a UH-60M Blackhawk Helicopter in Afghanistan during Operation Enduring Freedom.  PepsiCo’s extensive network of Veteran drivers will pass off the flag to each other at different relay points. The relay will conclude at PepsiCo headquarters in Purchase, N.Y., on Veterans Day, Thursday, November 11th.

During the stop at Stater Bros. Markets headquarters, Stater Bros. Charities and PepsiCo presented a $50,000 donation to the Children of Fallen Patriots Foundation, an organization that provides college scholarships and educational counseling to children who have lost a parent in the line of duty.

“We are very grateful for our continued partnership with PepsiCo and Children of Fallen Patriots. Supporting the education of the children of the heroes that lost their lives serving our country is just one way we can honor their memory,” stated Nancy Negrette, Chairman and President Stater Bros. Charities.

Funds will assist families of service members from all branches of the armed forces who have died as a result of combat casualties, military training accidents, service-related illnesses, suicide, as well as other duty-related deaths as ruled by the Department of Veterans affairs.

About PepsiCo
PepsiCo products are enjoyed by consumers more than one billion times a day in more than 200 countries and territories around the world. PepsiCo generated more than $64 billion in net revenue in 2018, driven by a complementary food and beverage portfolio that includes Frito-Lay, Gatorade, Pepsi-Cola, Quaker, and Tropicana. PepsiCo’s product portfolio includes a wide range of enjoyable foods and beverages, including 22 brands that generate more than $1 billion each in estimated annual retail sales.

Guiding PepsiCo is our vision to Be the Global Leader in Convenient Foods and Beverages by Winning with Purpose. “Winning with Purpose” reflects our ambition to win sustainably in the marketplace and embed purpose into all aspects of the business. For more information, visit www.pepsico.com.

About Children of Fallen Patriots Foundation

Fallen Patriots honors the sacrifices of our fallen military heroes by ensuring the success of their children through college education.  Since 2002, Fallen Patriots has provided over $38.4 million in total assistance, including college scholarships and educational counseling to over 1,812 military children who have lost a parent in the line of duty.  Nearly 20,000 children from across America will need future assistance.

Stater Bros. Charities is a 501(c) (3) non-profit organization that supports critical needs in the communities where Stater Bros. employees live and work.  Since 2008, Stater Bros. Charities has invested over $36 million in countless local organizations and causes that benefit hunger relief, children’s well-being, education, health, help for our nation’s veterans and active service members.  Funds are raised throughout the year from generous customers, supplier friends, and caring members of the Stater Bros. Supermarket Family.