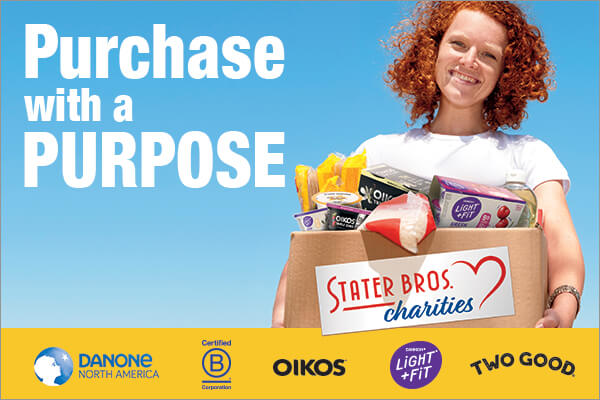 A portion of the sales from each Light & Fit, Oikos, and Two Good yogurt purchased at Stater Bros. Markets throughout the month of June, which was Dairy Month, will be donated to local regional food banks. To further hunger relief efforts and make an even greater impact, Stater Bros. Charities committed to a minimum donation of $10,000 and Danone North America committed to a maximum $20,000 donation at the conclusion of the campaign.

“Nurturing our communities is always at the core of Stater Bros. and how we do business. It’s because of partnerships with purposeful organizations such as Danone North America that allows us to continue our work serving the community and improving the lives of those who are most in need,” said Nancy Negrette, Chairman and President Stater Bros. Charities. “

Danone North America was formed in April 2017, when Danone acquired WhiteWave Foods and united two companies in North America with a shared commitment to purpose, growth, and good food. At Danone North America, we aim to inspire healthier and more sustainable eating and drinking practices, in line with our vision – Danone, One Planet. One Health – which reflects a strong belief that the health of people and the health of the planet are interconnected. Our spirit is ignited as the largest PBC and Certified B Corp in the world, as we eagerly drive towards an even more sustainable future.